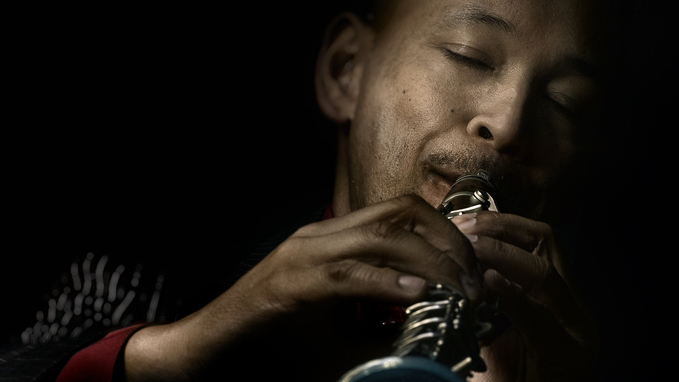 ​The day after my 40th birthday, I ​performed at a televised tribute to Sidney Bechet for an annual "jazz" awards show in Paris. My friend Pierre Christoph put together a rhythm section and I did my best to come up with a contemporary rendering of "Petite Fleur."

​Pianist and educator Eli Yamin featured me with his quartet at Jazz at Lincoln Center. ​Around this time, we also filmed some short educational videos for them that inspired me to do more. He has always been incredibly encouraging of my efforts to share what New Orleans has taught me.

​The Jazz Traditions Project was the band I formed during my exile from a flooded New Orleans. ​​In 2008, this waltz was 100 years old​ when we added it to our repertoire​. It was one of my favorite recordings of Django Reinhardt's when his quartet had clarinet. We tried making it a Carnival samba.

Blues In the Air

​The Little Gem Saloon was a welcome addition to the New Orleans scene when we first started perform​ing there. ​​I love any opportunit​y to work with guitarist Don Vappie​ because he embodies the perpetually contemporary spirit of the New Orleans tradition. And... #Boom ...#Louisiana officially under #stayh

In my thirty years as a working musician, I recognize this project as the most beautiful in which I have been involved to date. Whisper of a Shadow, completed in 2016 and recorded in 2017, is the conception of French composer, Yohan Giaume. It celebrates the contributions of Louis Moreau Gottschalk. My friend Yohan didn't simply arrange the composer's work. He started with Gottschalk's own inspirations, then let new pieces flower from the seeds of Gottschalk's works and arranged them in ways that translate the composer's Romantic aesthetic through the lens of contemporary New Orleans.

It's much easier to explain with the music. This clip is from the last time we performed the work near Perigueux, France. It pairs two sensuous pieces from a "Creole Opera" that debuted in New Orleans in March, 1807, a couple decades before Gottschalk was even born. The second part, in a major key is a plaintive aria called "Lisette" that Gottschalk included in his concert programs and likely heard in his childhood.

Share on FacebookShare on TwitterShare on Linked InShare by Email

​​Locked Down in NOLA
​Sign-Up for Upcoming
​Broadcasts & News